Here are the first minis I've completed for my ATZ games.  These are from Hasslefree in the UK and I must say they are fabulous figures.  Ordering them online was a piece of cake and they were delivered to my home in less than two weeks - pretty good considering the distance they had to travel.  Hasslefree may be a bit more pricey than other manufacturers but they are worth it.
One thing I'm a bit of a stickler about is having nice figures to game with.  I'll make do with unpainted minis and sloppy terrain when I have to but my goal is always to have quality, well painted figures and terrain for a game.  It just makes it that much easier to get drawn into the game world.  Also, I enjoy building and painting stuff for games.  The creativity and art of this hobby is as much fun to me as the games themselves.
These are the first figures I've painted in several years.  I had fun painting them and I think they turned out pretty good, if I may say so myself.  I suppose it's like riding a bike - once you learn you never forget.  I'm a little disappointed that they all have 'raccoon eyes' but they look fine on the table, so no big deal.
In getting back to painting figures I noticed that my real eyes don't work as well as they used to!  Getting older, you know...  Fortunately Hobby Lobby had a 'big sale' so I now have a nice Ott light with a magnifying glass that helps tremendously. 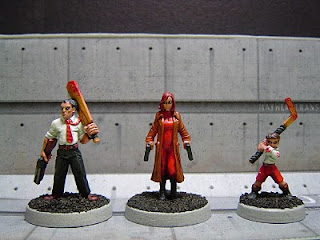 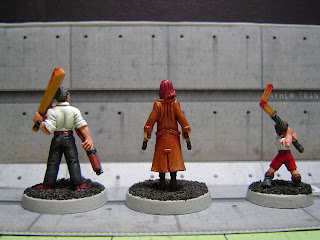 What we have here are hero versions of myself, my wife and my son.  We'll be starting a campaign with the ATZ Day One scenario soon and needed to represent ourselves on the table.  Note that these are 'hero' versions and that we really don't look anything like the people these figures represent!

Starting on the left we have 'Hero PD'.  This is the 'Ray' figure from Hasslefree.  I hope you can see the obvious Shaun of the Dead resemblance as I'm a huge fan.  Love that movie!  The figure is unmodified and comes with a double barrel shotgun and cricket bat.  I would have liked to have had him holding a Colt .45 automatic pistol in his right hand as in RL I have one of these.  Unfortunately the stock of the shotgun goes right up his arm and I didn't want to try to repair the arm after removing the gun.  I suppose I could have clipped the arm off at the sleeve and attached a new one but it seemed like a lot of trouble for a minor thing.  And I didn't have any extra arms lying about anyway!  I've painted him in Shaun of the Dead 'uniform', complete with some blood spatter on the bat.  I really debated about adding some 'red' to his shirt but in the end decided to have 'clean Shaun' from the beginning of the movie.

Next is 'Hero Mrs. PD', the 'Dionne' figure from Hasslefree.  The inspiration for this figure seems to be from Kate Beckinsale's character, Selene, in the film Underworld.  The model is unchanged from the stock figure and I like it just the way it is.  I went away from the traditional all black of Selene as I wanted a more colorful character for my games.  Red seemed an obvious choice for the jump suit and I tried to make the overcoat look like a leather duster from the Old West.  I think it turned out OK.  My wife likes it anyway...

Finally is 'Hero Monkeyboy', my son.  This is the 'Peter' figure from Hasslefree.  The model comes with a crowbar that he's swinging but since my son plays in a travel hockey league I knew I had to get him a hockey stick.  Fortunately, Hasslefree also sells sprues of zombie killing melee weapons, including a hockey stick!  What luck!  The conversion was very simple - just chop off the crowbar, cut the hockey stick to fit (removing a section where the hands are 'holding' it) and then glue the two pieces in place.  My son is 13 so this figure is a little young for him, but he likes it all the same.  He also decided that he wanted some 'red' on him so I've added some blood spatter to his clean white shirt.

You might notice that I've used a common color palette with these figures.  I think it makes for a nice unity, blending colors from each of the parents on the child.  That's the kind of stuff I like to add to my games, making my groups look 'right' together on the table.

I'm really looking forward to getting started on the campaign.  My son and I have had a couple of 'test' games and had a blast.  Hopefully I'll get the first campaign scenario in soon.  I'll post a report when I do.  Until then, keep an eye out for the rising.  I'm ready.  Are you?

This is a blog about zombie gaming with miniature figures.  I've been a wargamer for many years and recently discovered a game called All Things Zombie: Better Dead Than Zed by Two Hour Wargames.  As a zombie fan I was hooked from the moment I looked at the rules.  Then I stumbled upon a couple of blogs:  Vampifan's World of the Undead, and Tactical Miniatures Gaming.  What inspiration!  So, here is my attempt to present my own zombie stuff and maybe inspire some others to paint, build and game.  I hope you'll enjoy what I offer.  Peace.
Posted by Ironmonk at 7:33 AM 2 comments: