I painted up 7 of the 50 Victory Force zombies I bought a while back.  They had a 50 zeds for $50 deal and I have to say these are some great looking minis for an awesome price.  They paint up well and have lots of character.  In the lot of 50 I only had 4 that were identical.  I'm planning to make corpses with the extras. 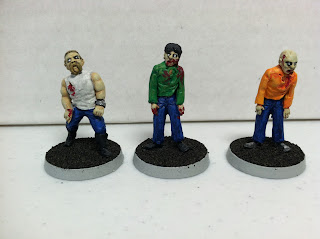 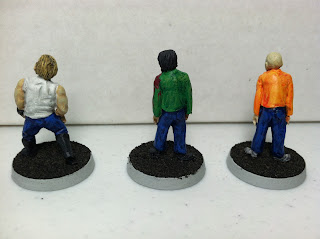 As I said they all have character and a few of them look like celebrities.  The first one in this lot has to be Paul, Sr. from American Choppers.  At least I painted him that way.  The second looks a bit like Ringo...or one of the Beatles.  The last one looks like Patrick Stewart when you look closely at his face.  I wish I would have realized this earlier.  I would have painted him in a Star Trek uniform. 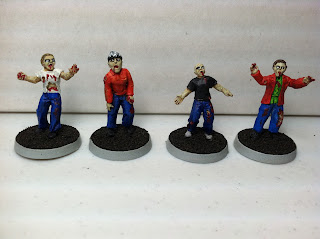 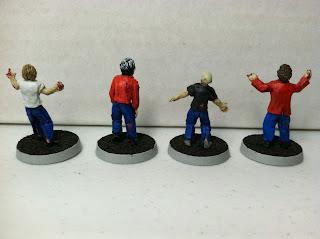 This second batch are not easily identified as any celebrities.  Although the first one reminds me a lot of Christopher Walken.  The beany guy cold be Gomer Pyle or Jughead from the Archie comics.  The other two are just standard zeds.  The last in the line is the one my 7 year old stepson did.  With only a little touch up he turned out pretty well.

Hope you enjoy looking at a few minis.  I have LOTS of VF zombies to finish, a few more Hasselfree survivors and the rest of Bobby Jackson's thugs.  I also ordered the Tactical Miniatures Police and Narcotics team figures today.  Soooo, look for more minis to be finished and posted soon.