Rumors of my Demise...

Life being what it is, I'm not even going to offer any excuses as to why I have not posted since July 4.  I guess we will all need to come to terms with the reality that this blog will be sporadic...

Anyway, here are two more minis I've painted recently.  That makes 9 of Bobby Jackson's Thugs for my collection.  I have the other 3 in the queue to be painted. 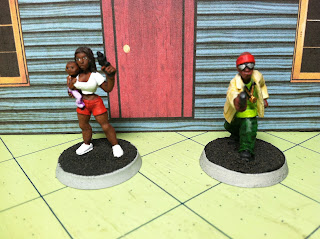 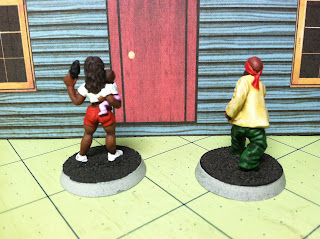 There is not much to say about these figures that I haven't already said.  Exceptional quality and fairly easy to paint.  The baby on the woman's hip was a bit fiddly, but I think it turned out OK.  She certainly adds a lot of character to the game.  I did modify the man slightly.  He came with a topknot or maybe a beany for a hat on top of his head.  I thought it was silly so I shaved it off and left him bald with a bandana.

I've decided I will revamp and start a new campaign with the introduction of All Things Zombie: Final Fade Out.  I'm looking forward to the new rules being released.  I've begun some initial character development and am creating a story tree, making up my own Day One and following series of encounters.  Look for more on that later too.

Meanwhile, I'm expanding my collection, one model at a time.  Until next post...peace.