I've been working on finishing off a bunch of Ogre Miniatures I bought years ago.  I've always loved this game and the imagery from it and these models are fun.  I'm delighted to see Warehouse 23 has begun selling these again!  I have enough models to field moderately sized Combine and Paneuropean forces but I will probably buy some more.  I would especially like to get an Ogre in each of the various classes.  Currently I only have a couple Mark IIs, a Mark III and a Mark V.  Anyway, on to the pics...

These are all for my Paneuropean Quebecois force.  The Light Tanks look brighter and shinier because I used a different clearcoat finish on them.  I will have to redo them with a matte finish.  For size reference, the squares on the green mat are 1 inch.

Thanks for looking!  Maybe I'll get some zombie stuff up here soon.  I'm planning to buy Wargames Factory's male and female survivors sets once I reduce the pile a bit more...

A Bit of Painting...not Zombies.

I did some painting today and finished several models I started years ago as part of an OGRE/GEV project.  I've been clearing out, cleaning up, and reorganizing my hobby life and came upon these.  I don't play OGRE much, though occasionally my kids and I will drag it out.  Still, I'm too nostalgic to just get rid of these models.  OGRE was my first wargame when I was a middle-schooler back in the late 70s.  So, I've decided to finish this lot of Paneuropean forces.  With these finished I will have the core of two armies - both Paneuropean and Combine - completed.  I also have a few OGREs - 2 MK IIs, a MK III and a MK V.

I've gone with a blue and white paint scheme as these are to be part of a Quebecois regiment.  I don't have much experience painting in this scale (6mm or 1/285, I believe) so they look a bit bodgy up close.  They look fine from arm's length though, which is perfect for the tabletop.

First up are two Howitzers. 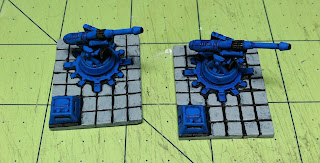 I bought these years ago with the plan of having large Paneuropean and Combine forces - enough to do most of the scenarios in the rules and have plenty to choose from.  I initially bought enough to do the Icepick Scenario in the OGRE Book as well as the basic scenario.  Unfortunately, they don't make these minis any longer.  I'm hopeful though that with the new Designer's Edition of OGRE coming out, maybe Steve Jackson will do another run of this mini line.  They are great figures and I'd like to bulk out my forces.

It is always fun what one stumbles across when going through old projects.  Often I have my interest renewed.  OGRE has long been a favorite of mine and the rules for OGRE Miniatures are an excellent set for battles in this scale.  Maybe I'll set up a table and have a go!
Posted by Ironmonk at 4:17 PM 4 comments: