Miniature basing has always been a struggle for my perfectionist brain. As long as I'm playing on a table where the terrain matches the bases of my figures, it's fine. But when I'm playing on a desert world with woodland bases...well, it just bothers me.

So I decided to try a solution I stumbled upon a while ago: Clear Acrylic Bases. Since I play All Things Zombies on a variety of terrain, I decided to convert some of my zombie bases to see how I liked the results. I ordered 100 bases from Litko and I was off and running.
I really like how this turned out. I've converted all my zombies and am starting on my survivors/gangers. It is not a perfect solution - that would be models that stood without any base at all - but I like how this works. In fact, I like it so well I've converted my Reaper fantasy figures I use for D&D...

I am thrilled with this look and will be working on converting all my fantasy and All Things Zombie collections. Traditional basing, with that diorama-like quality, is cool for display models. But for game pieces, I really like how this works.

I'm interested in what you think or if others have tried this. Let me know your thoughts.

Until next time, carry on!
Posted by Ironmonk at 5:31 PM 7 comments:

I'm continuing to collect Dwarvenforge modular terrain. I've accumulated a fair bit from their caverns set. It's great stuff and I thought I'd share a few pics just for fun. 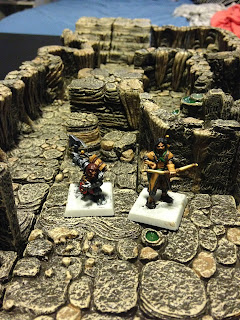 Until next time, carry on!
Posted by Ironmonk at 7:38 AM 2 comments:

I pulled together a couple friends Friday night for some All Things Zombie. The players were both new to the game so I played as the referee and ran the scenario. I created a Search Mission where the players had to secure a safe place to stay for the night. I loaded up a farmer and his wife as one PEF, a rogue cop as another, and a mom and her two kids as a third. Not all of these would automatically be generated by PEF resolution, but were possibilities on a d6 chart I made. The rest of the entries on the chart were zombies.

This was a one off scenario in a rural area with the farmhouse as the main feature. Since I was refereeing, I said the farmer and his wife (Mr. and Mrs. Brown) would be in the house if they did not generate as a PEF. Too bad, considering what happened...

Both of our heroes, Shawn and Ed, are stars with Rep 5. Shawn has a sawed-off shotgun and a cricket bat. Ed has a katana and a pistol. I did not use attributes as I was keeping things simple for my friends who were unfamiliar with the game.

I took a few pics throughout the game, but did not really log each turn in full. I think I've captured the flow of it though.

My idea was that the heroes would have to gain entry to the house and convince the Browns, one way or the other, to let them stay, all while dodging zombies and trying to stay alive. Of course, as is often the case in ATZ, it did not turn out that way at all... Taking what they can, the heroes pile into the van and head off down the road, churning gravel. Behind them, as they turn onto the highway, a fireball erupts into the sky. The sound of the explosion rolls like thunder through the night.

"I guess there was propane in that tank after all," says Ed calmly.

Marie lays on the back seat holding her son, the two of them weeping quietly.

So, not the most successful mission. Although, to have a fully fueled vehicle is nothing to dismiss lightly. Still, I sure hope the Browns weren't home after all!

We had a great time! My friends are hooked and want to play again. I'm hopeful that we might even get a regular game night going.

Until next time, carry on!