I've been a Star Wars fan ever since my 11 year old imagination got carried away by that Star Destroyer looming onto the screen firing at Princess Leia's corvette. Star Wars IV: A New Hope literally changed my world and set me on the path of Geekdom that I still walk with pride today. So, when Fantasy Flight Games started advertising Star Wars: Legion, I was hooked instantly. The iconic figures seen in miniature grabbed my attention and I knew in an instant I'd be buying this game. My copy arrived last week and Star Wars: Legion is my new obsession.

The only down side here is that the figure scale is BIG. I measured a Stormtrooper and he is 35mm from the bottom of his feet to eye level. Definitely much larger than the 28-32mm "heroic" size minis produced these days. It is disappointing that I won't be able to match these figures in games with the rest of my 28mm collection. Still, I have to say I'm very pleased overall with these figures and this game.

The rules look interesting. I haven't played the game yet, but the mechanics look to be simple with enough variety and "crunch" to make for a good tactical tabletop wargame. I'll write up some battle reports when I've played.

Obviously I will need to build new terrain to fit this larger scale, but, hey, who am I kidding? I'm feeling geeked about that too! 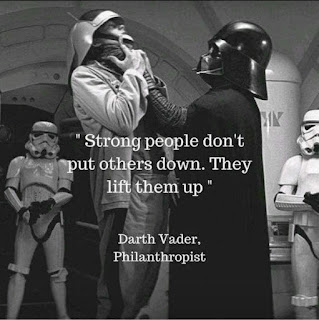 FFG is releasing an entire line of Star Wars: Legion figures and models. I anticipate blowing the gaming budget on this stuff for quite a while.

Until next time, carry on!
Posted by Ironmonk at 8:45 PM